Waking up this morning and going to the head (toilet), I notice a new sign had been placed above it. It read: Don’t place anything in here unless you have eaten it! Don’t put your cigarette butts in here they become soggy and hard to light!

After a quite night without any sails up, we finally got a small breeze at about 4am. We pulled out the genny or genoa and started to make 2 to 3 kts. We decided after looking at the weather that we needed to go north. We all resigned ourselves to this course but our real feelings were apparent. When will we get there at this rate? So ensued a long discussion and various calculations led by Jean. The worst projection was that we get there about 2nd or 3rd February 2014 or the best was 31st just before cut off and prize giving. This did not take into account us becoming becalmed again or on the up side that the winds end up being stronger than predicted. At the moment we are in last position excluding the multi-hulls even on handicap, although our handicap rating is still pending. Kevin reminded us that 11 boats did not make it much passed the first 2 days so at least we are going to do better than them and furthermore it was only sporting of us to give the other boats a chance! Yes… Kevin we are all with you.

Shaun as always upbeat about most things said he could feel the wind coming and remind us that there was plenty of other yachts within catching distance. Let’s hope so!  After a long debate and some joking the crew agreed to not have negative thoughts and the motto is now on our whiteboard in the galley although written in a much more expressive language. It was agreed that we should also do an inventory of food just in case we spend an extra week on the water. Now don’t get me wrong there is a few of us on board that would hardly suffer from a weeks enforced diet and there is no chance of running out of something to eat but we have become accustomed to the cruising class style of sailing and would prefer some of the essential ingredients to be available to the end rather than wasted now.

The morning livened up after that as we all agreed to make the most of each moment aboard. Kevin, Shaun and I, continued to working on our sailing aerobics class (sure to be a hit with all future yachters). You will notice in the pictures, the full stretch we get on our arm lunges and our concern for safety as we wear our safety lines. Mark in the meantime, after studying and setting the sails, made some comfort food. The largest loaf of bread I have seen in a while. He made the dough rise by placing it on the generator engine.

Shaun in the meantime on the helm was delivering true to promise. We were getting more wind and starting to make 5 to 6 kts and this held for some time before dying off late afternoon. The fishing has taken on a new dimension of late and over the last 2 days we have caught 4 Dorado, which were duly returned to the sea for being under sized. It’s quite interesting in that every now and then we come across a buoy or large piece of kelp or even pieces of rope drifting in the sea. Under and around these items has developed a mini eco system and invariable Dorado nearby. Yesterday evening Mike looked like some wild sea cowboy standing on the stern, fishing tackle flying around his head as tried to cast his line close enough to a passing buoy and hook one of the fish he could see so desperately near.  Not only did he get close but to our delight and laughter he actually caught one by hooking one directly in its fin. What are the chances of that! He threw it back into the water, more in fear of the sailor’s story about Dorado that Mark had explained to him earlier. Never eat a Dorado unless you are in a life raft. Seemingly it is bad luck to catch and eat these fish in normal circumstances because if you are forced to put to sea in a life raft they are the fish that will come and live around the life raft for you to catch and survive on. Mark has been watching our fishing with amusement up to yesterday when he announced he was going to make a lure and catch a fish. For those fishermen out there, he took the bottom casing of a ball point pen and the wrapper of a Bourneville dark chocolate and wrapped it round the pen casing gluing it down. He then cut the end of the wrapper in to equal lengths to form strands like a glittering grass skirt. He tied the hook through the centre so it was hidden between the glittering strands. Then onto the line it went. The results were evident. He caught 2 of the Dorado in a matter of hours. As a particular fan of this chocolate, I quite relate to why the fish are hooked!

Warwick cooked dinner with my assistance. It was a potato, butternut and corn bake and fried ostrich sausages. This was assisted down with home baked bread. I can’t help think that whoever bought the food has a “thing” about sausages. At least there is some steak left that I will try and take out for tomorrow.

It was a relaxing evening and all were in good moods despite fairly little wind and the fact that we were occasionally moving further away from our destination. I stayed up to do my watch which was from 10 to midnight. 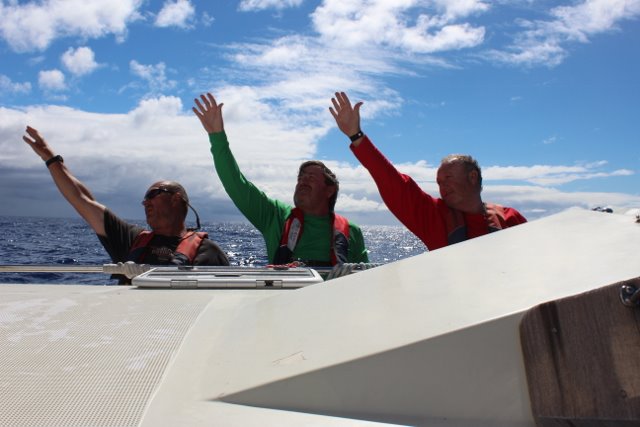 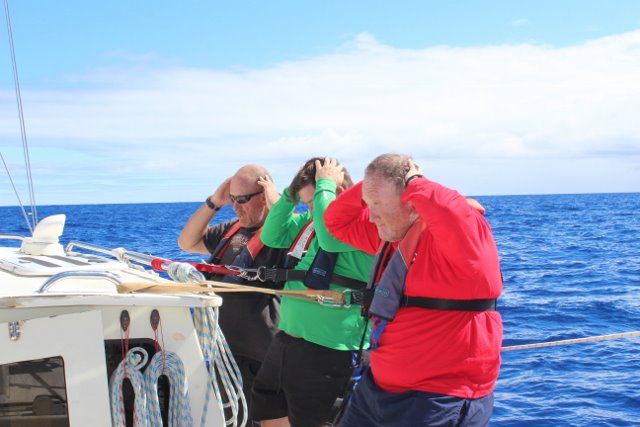 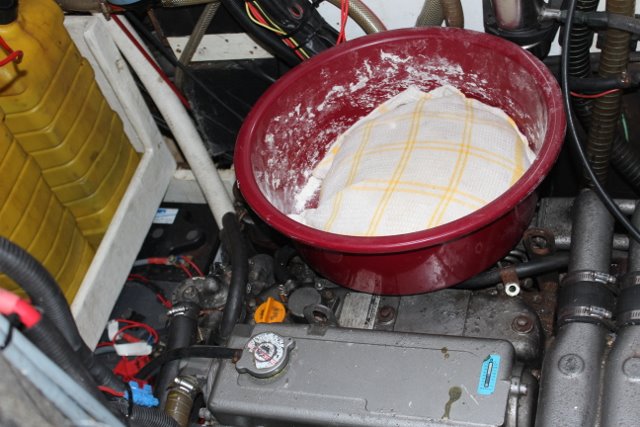 Out in the middle of the ocean no one can hear you scream! Day 12 – Wednesday Day 14 – Friday