The clocks went back another hour at midnight and we are now on UTC -1. I slept well after last night’s proceedings. I woke up just half an hour before breakfast, and Sean who had just woken up, managed to get to the bathroom first for his early morning shower. I had to chase him out eventually as I thought I might have to go out the port hole in desperation but felt that it might well be considered inappropriate.

He made up for making my desperation worse by offering Mark and myself one of his special expresso coffees from his portable expresso machine, a nifty device for camping but ideal for yachting and camping on a bulk carrier I guess. After that we headed down to breakfast in the officer’s mess where we have been eating since the second day aboard.

I am always hoping that it will be an egg dish now as I prefer not to eat the porridge, since it is heavy and starchy. This morning I was lucky as it was scrambled eggs. There are four groupings of tables in the mess hall, although they are made up of two single and two double tables. Each group has a selection of condiments, spices, jams and pickles on them, which makes for interest choices of how to complement each meal.

I am partial to spice and hot sauces so inevitably one of these are added for my enjoyment. With most meals, flat bread is served as an extra and one can use this to support your meal or just as an additional bite with a bit of honey or jam. Sean is a bit partial to it with honey. He claims it is carb free in the hope that the body metabolism gods are listening!

After breakfast, we head for the regular mess for coffee and a bit of fresh air on the outside deck a journey of no more than 15 meters. As we talk about the sea state and consider the wind as well as where the other boats in the Rio race may be, we are approached by the 2nd Officer to ask if we are alright and whether we need anything.

I can immediately sense a difference in in his demeanour from the previous two very hard days. He is relaxed and proceeds to tell us about calling the Captain’s family and explaining to her what happened with her husband and what the procedure would be before she can expect the body home. He said it would have been very difficult to call her the previous day as he was very close to the captain and that they had spent many nights on the Bridge talking about private and personal matters apart from business and he was too emotional to make the call.

He then talked about his country and how the rest of the world perceives Iranians. Because all Iranians are of the Muslim faith and live in the Middle East, he says there is a general perception outside the country that they are terrorists or mad zealots. In fact, they are normal people that hate violence after the 8-year war with Iraq and in fact life amongst the average man is determined by their own belief system.

The examples he used were that some may go to the mosque and others may not, some may drink alcohol a little and some not but more importantly there are Jews living in the country that have always been Iranian. His main point is that they are not forced into being fanatical stereo typed individuals by the regime nor are they anything like the stereo types being thrown around by the politicians of USA and the West.

The moral of the story is that humans are humans – whatever their culture, religion and colour in general and it is politics that mess up this fundamental. Whether it be cultural, tribal, religious or just looks (colour) – politics! It was a very sincere and unforced discussion that we all appreciated.

Shaun, Sean and myself then decided to head to the bow for our daily walk and exercise. I have worked out that if I just stayed in the super structure for the day and moved from the room to meals and on to coffee and mess room and then to bed I will not even do 2000 steps in a day! So, all you step measuring fanatics you know what that means! By the end of the 10 or so days I might start looking like one of those whales we were hoping to see on Trekker but didn’t.

So, every day we have decided to walk to bow and do some exercises even if it is minimal. Wesley and Richard were already there playing with ball they made of cloth that did not bounce. I guess it was called “one bounce not”! After watching for a few minutes I decided that it was not a game made for a gammy-legged one footer like myself.

I was hoping that my wife would be jealous of me by now (I guess she might be already! Who climbs a ship in the dark from a moving yacht J). I am talking about the wonderful tan I would have been working on daily on Trekker. Even oiled up daily with sun tan lotion I was going to be more brown and crispy like burnt bacon (which by the way I am craving – no bacon on this carrier I am afraid). No worries though, each day we are taking our shirts off, (Girls be careful! Oh, if only there were girls, only kidding darling!) so that we become tall dark and handsome by the end of the trip. Okay, I will leave out the tall bit.

After an hour of tanning, some press-ups and meditation (there is nothing like staring over the bow down at the anchor for 10 minutes because you can- try it sometime!), We head back to the super structure for lunch.

Heading into the mess room there was laughter and happiness the pressure of the captain’s death was being accepted. Life was moving on! Seemingly Sunday is the company day aboard ship to have mince kebabs and a fizzy drink. Well the kebabs are delicious have been always partial to this type of food. I did however not eat the masses of rice presented as usual. The mess hall was busy including the 2nd Officer, his wife and son. Amir, his 5-year-old, did his usual handshakes with us. This time we taught him the South African hand shake.

Afternoon is rest time and all aboard seem to disappear to their cabins or work areas. Our guys try to read and sleep to move time on. Shaun plays Sudoku on his phone in the hope that he will prevent Alzheimer’s. He plays a lot of games so must be really worried about this. Nothing to do but eat sleep read and contemplate!

Of course, I am writing this blog and thinking about our next campaign – Rio 2020!  Now, I am not aware what is happening with the 55Hundred campaign for the IMAGINE charity goal in Underberg. It is very frustrating not knowing what the situation is now that Trekker II and communication is gone.

Dinner at 17.30pm was soup and a noodle Brianne. I ate the soup only as I am trying to avoid the Carbs. The surprise was a magnum ice cream as dessert – double chocolate. The first desert since we came on board and obviously related to the regular Sunday food programme.

After coffee in the regular mess hall and standing on deck for a while and chatting, we slowly made our way to our cabins. Some of the guys had found a deck of cards and were playing rummy. Sean and myself, chatted and listened to music while sipping on flavoured water to well after midnight. No bar on this cruise! The rules of the company on the ocean liner was that no alcohol is to be consumed on board by the crew.

Quote of the day: “Any damn fool can navigate the world sober. It takes a good sailor to do it drunk.” Sir Francis Chichester 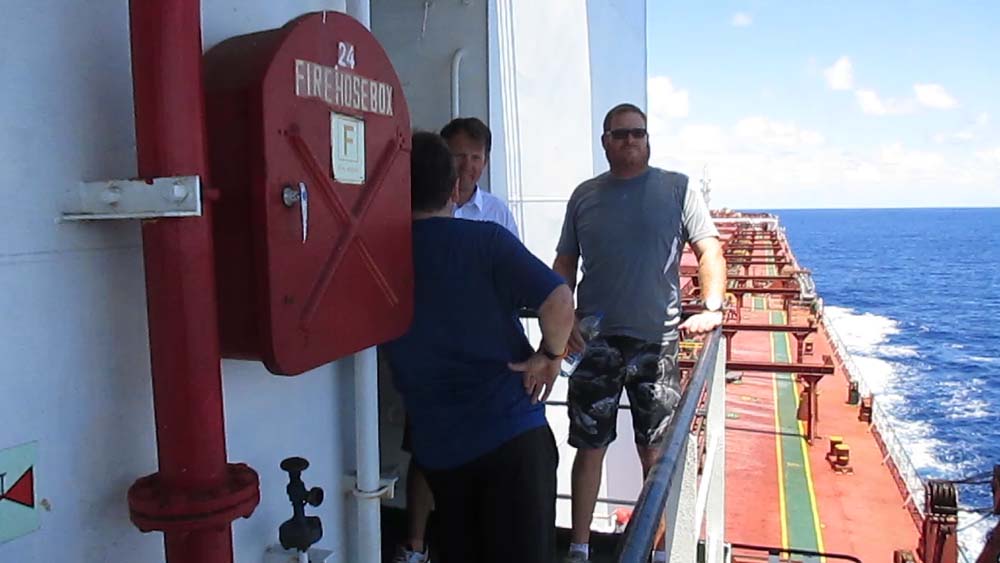 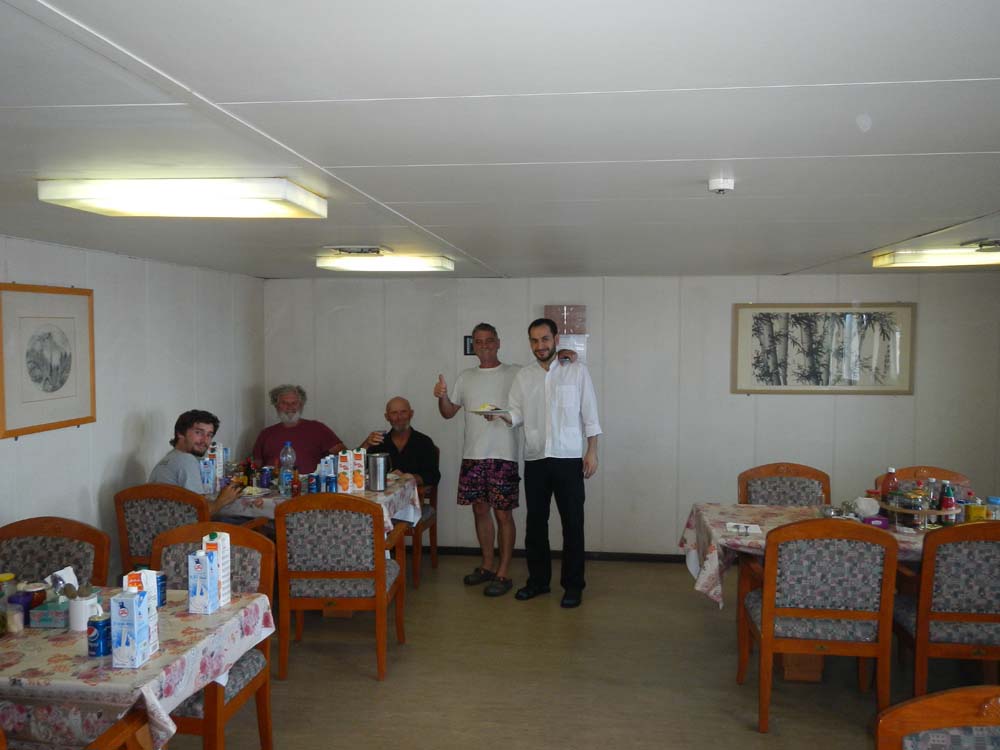 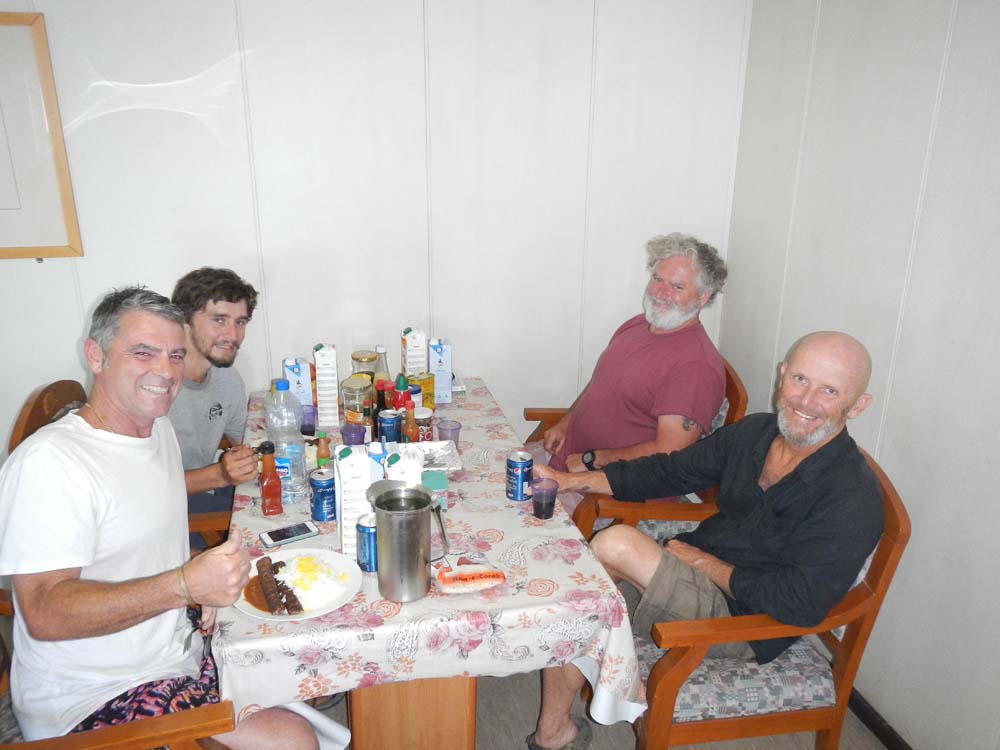 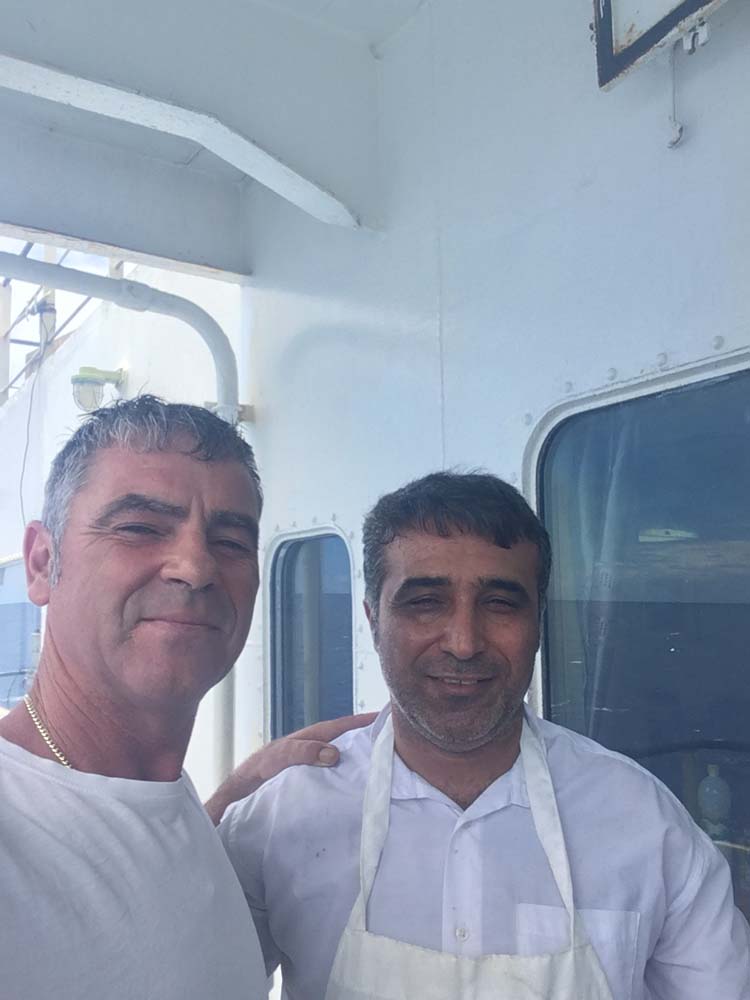 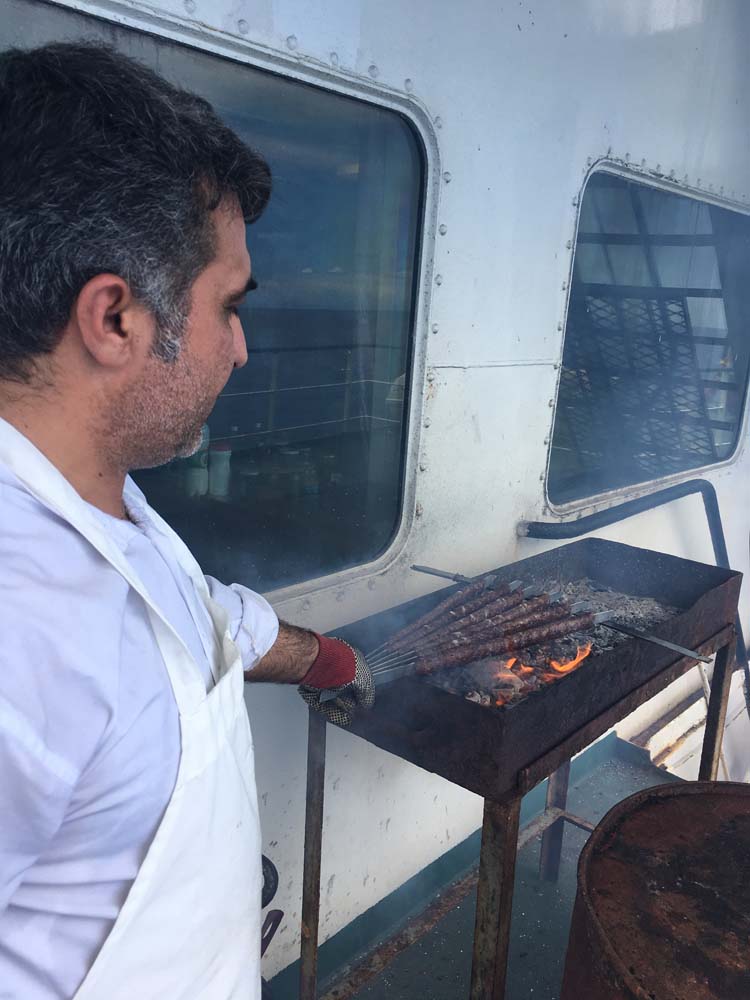 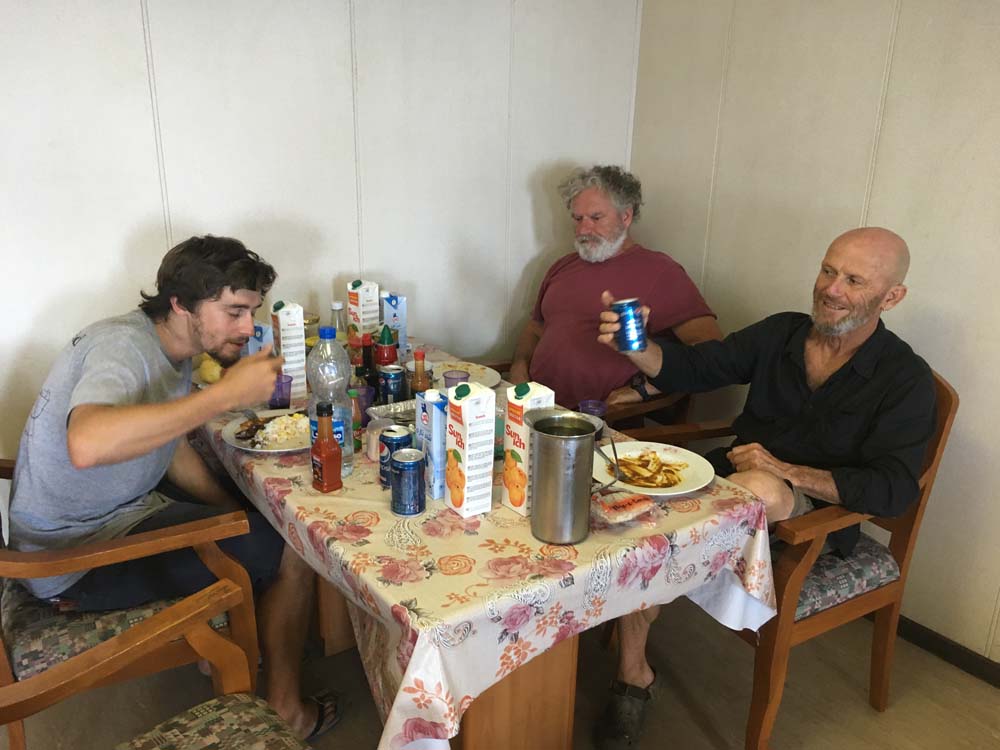 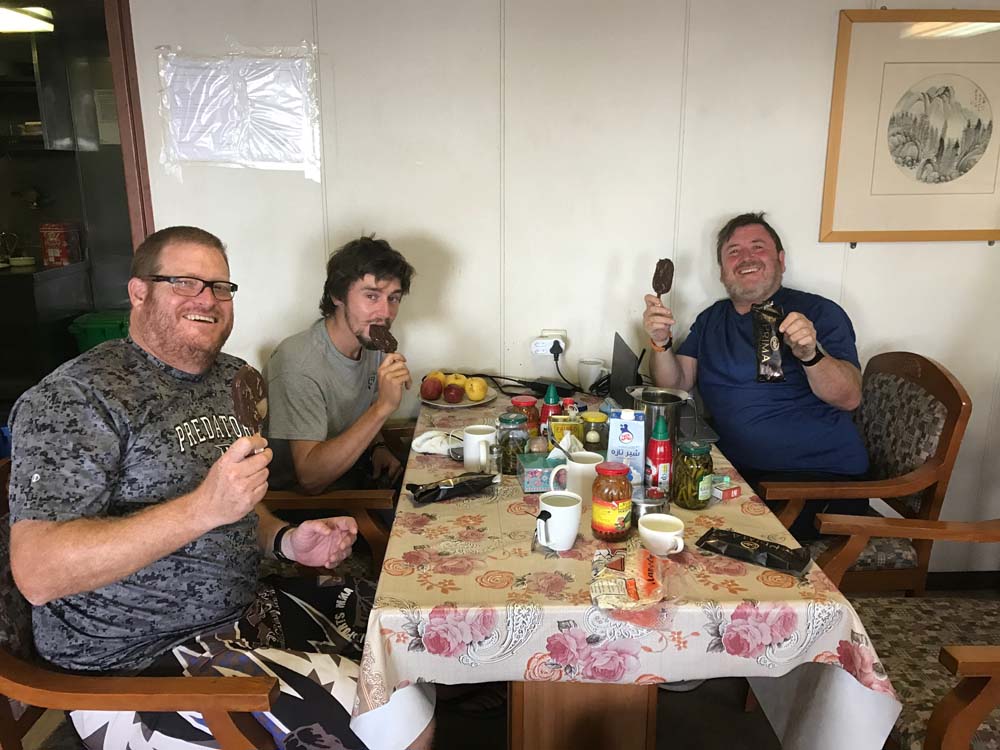 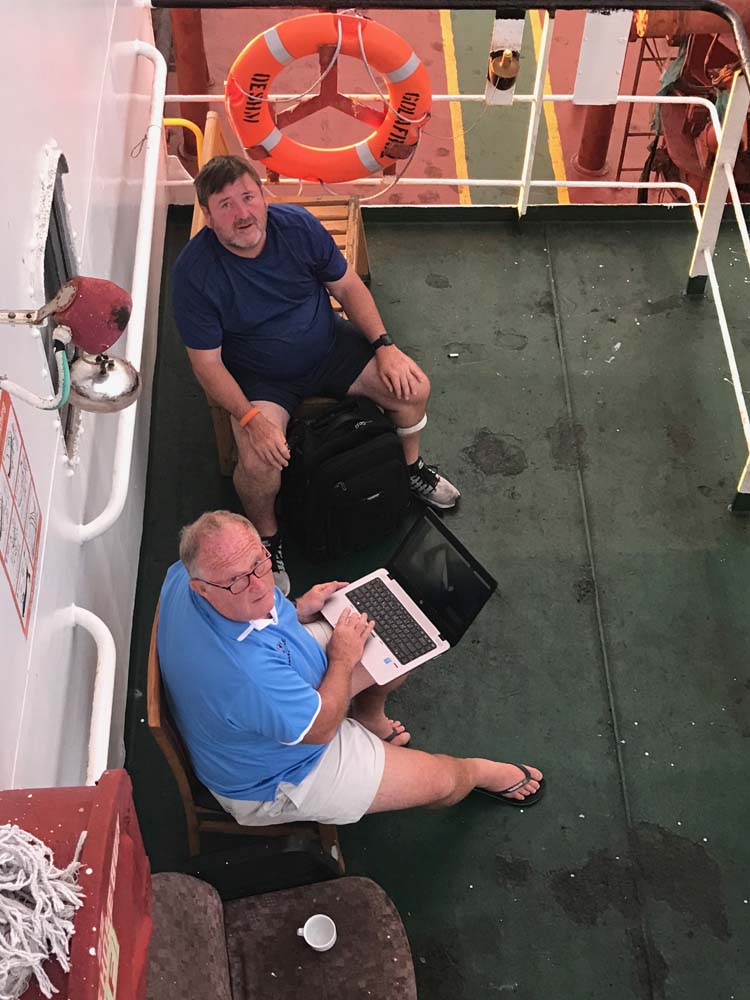 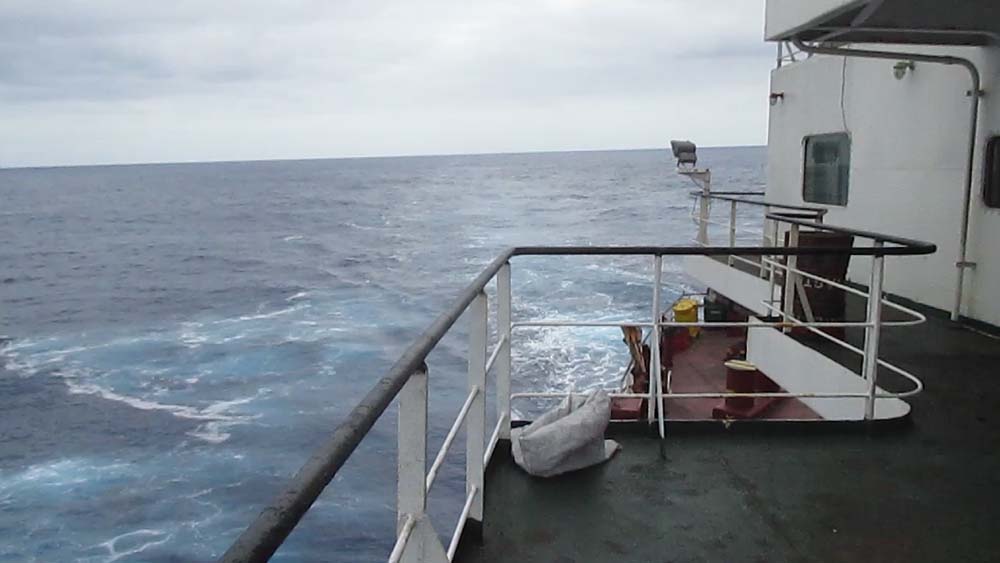 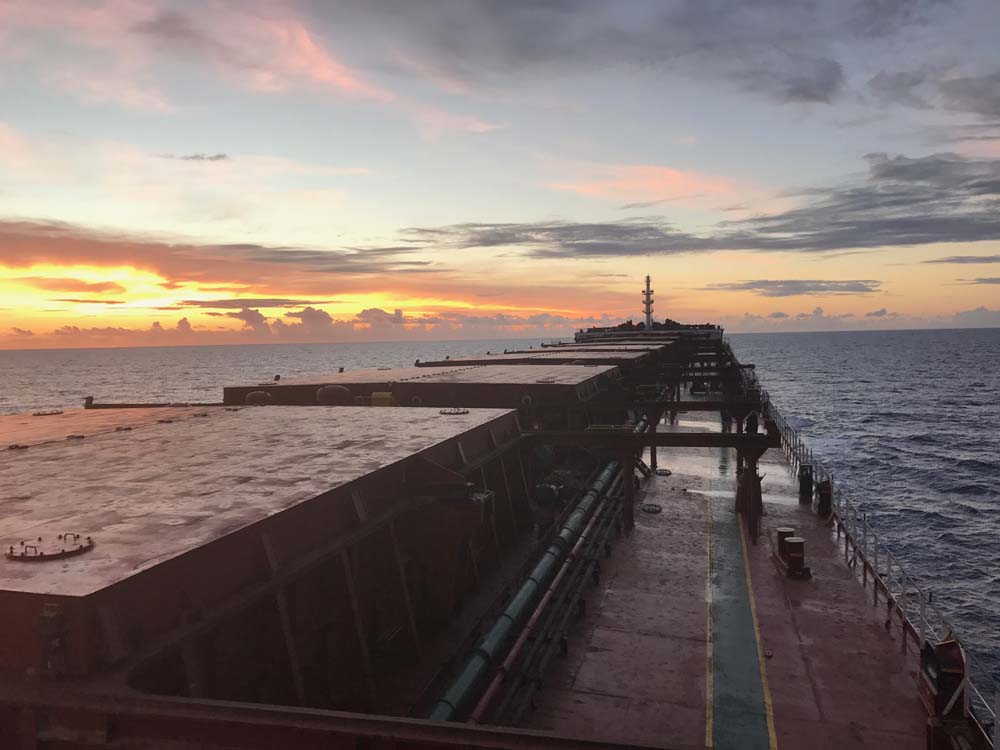 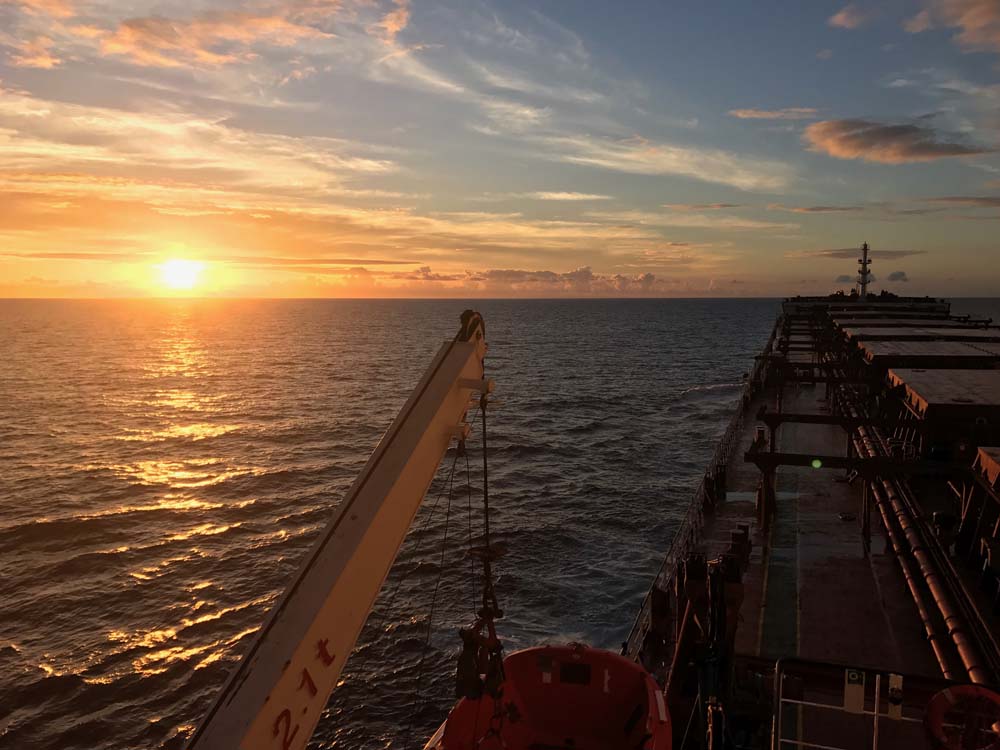 Day 7: Saying goodbye to the “Master” Day 9: The monkey gave us sleeping pills