The build up to the unknown: Before we set sail

27 December was the planned date for our arrival in Cape Town, although Shaun Verster had arrived the previous evening, leaving Mauritius on Christmas morning, having Christmas dinner with his family in Durban and then flying to Cape Town to join the boat. Of course, most of the crew live in the Cape Town region so they were just waiting to hear when the rest of us would get in and when we should meet for the first time to make final preparations.

Mark, our skipper, Wesley, the mate, and Michiel who is our ground crew manager, were already at the boat as they had been working furiously to get it ready doing those final last touches and checks. Mike Steven from Dubai also arrived on the 26th. Peter and Richard would only come on board on the 1st, the day that we were due to leave, as they preferred to stay at home in the comfort of their own beds before sleeping in the confines of Trekker II and of course spending time with their families. Sean Permuy and Mike Stevens also preferred the comfort of a hotel while Shaun Verster, Mark, Wesley and myself stayed on the boat.

On the morning of the 27th, I said goodbye to my children, Umeyyan, Mary-Jade and Kathryn, and my wife, Karey, took me to Lanseria Airport. I was rather flustered trying to organise last-minute items to be packed and forgot my glasses, so at the airport I had to call my sister, Shona, who was leaving to Durban after spending Christmas with us, to rush to the airport with them. After an emotional farewell with Karey, I boarded the plane for Cape Town.

Karey and the children were planning to go to Australia to stay with family during most of the time that I was at sea. By being there and being focused on something new, rather than day-to-day of them living at home, she thought she would be distracted from the worry that naturally happens when the husband goes on a transatlantic crossing. Sitting on the plane I realised how difficult it was to leave them behind and thought to myself that I better make sure I get to the other side safely. Little did they know the dramas that would unfold, but I think Karey prefers not to think too deeply about the risks involved and I think this is important for her sanity.

In life, you do not have the ability in a lot of cases to control events, but it is important to try and manage or control outcomes. This is the same in day-to-day life, for example: Driving a car to work with the potential of an accident. The fact is that there is this potential every time you get in the car, but no one around you worries about that on a day-to-day basis – it would drive us mad in a short space of time.

However, when you do something that’s not common – like sailing across the Atlantic – everyone naturally focuses and worries about what potentially could happen from a dangerous point of view. Of course, with us, going out there, it is about the adventure, the thrill, the adrenaline and the achievement of getting to the other side in the best position in the race that we can…. So, I landed in Cape Town.

I headed to the V & A Marina where Trekker II was moored near the aquarium. Shaun, Mark, Wesley and Michiel were already on the boat and it was good to see them all for the first time in a while. It was agreed that we would meet with everyone the following day at 10 AM so Michiel arranged this with all concerned. I was extremely excited to see the newly painted dodger in orange with the new SIS Global sponsor signs along the side of it. The sponsor tagline “navigating the cloud “very appropriate for the journey we are about to undertake.

I was even more surprised to see how well Michiel and the team had inserted two new seats – one at the helm and one on the scoop – for added comfort on the journey ahead. The bright orange scoop seat fitted in particularly well with the colour scheme that we had developed for the newly renovated Trekker II. Even the gas bottles on the back of the stern were orange and blended in perfectly with her looks. She looked and felt like she was ready to go. I would have to wait another two days to see the full glory with the new sails that had been sponsored by SIS Global.

Soon after this, Sean Permuy arrived at the boat after having lunch with his wife, Cath, and son, Jordan. After looking around, the two Sean’s (but with different spelling) and myself headed off to the local food warehouse for what had become a tradition over the months and years leading up to this point – having a ginger beer or two, possibly even three and maybe even a fourth. It was a great afternoon of chatting of what was to come.

Sometime later we headed to the Beer house to finish off the evening with some food and beer. Sean P left us sometime soon after and headed back to the hotel to be with his family, leaving myself and Shaun V, my co-owner and old friend, to chat about the joys of restoring and racing in such an iconic boat as Trekker II. At that moment, we felt extremely proud and fortunate to be the ones bringing her back to “racing shape” again!

I awoke at 7am the next day, ready for work and having had a very comfortable sleep in what was to be my bunk for the next few weeks. I discovered that my glasses saga was still plaguing me as I could not find either of my two pairs. I later found one pair in the pub to my relief.

At about 9am in the morning, Michiel and myself went to order the meat for 21 days. If anyone knows me, they will know that I’m extremely fussy about what meat I eat and I made sure I was the one that went to the butcher to order. I can assure you that it was good, wholesome, fatty, Banting style – but I did ask them to add some chicken for vegetables.

At 10 o’clock, the crew for Rio assembled in the galley around the mess table and we chatted about what needed to be done prior to leaving. Peter was the only one not present as he was still working right to Friday the 30th. Sitting around the table, it dawned on me that this was really happening – especially when Mike Steven started to use expletives that he is famed for and that I remembered very clearly from the previous trip to Rio.

Excitement and anticipation was upon us. We proceeded to discuss the finer details and expectations as well as duties. The food was discussed in detail that everyone is aware what we were going to be purchasing but more importantly any snacks should be acquired by the individuals to suit their own taste but furthermore no one should expect anyone to share these snacks on route. It was agreed that everyone could bring a bottle of whiskey. We agreed on a basic routine for the next few days leading up to the race start and set about our work. That evening we had a great meal at an Argentinian restaurant.

On Thursday, the 29th we had decided to take the boat out with various friends that were in town. We had a great sail with Wikus, Denys and Edwina, Victor, Michiel and all the crew except Peter. It was great to see the new sails with the SIS Global signage, especially the large A3, spinnaker type sail. The day was perfect.

Shaun and myself had some well-earned beers at the Cape Grace hotel, while proudly staring at Trekker II moored across the water.

The next day we had to head down to the Royal Cape Yacht Club (RCYC) to clear ourselves and the boat from immigration and customs, which was done with little commotion. Then it was back to the boat at lunch time to unload the provision from Makro and for me to set up the communication on the PC for the trip via the satellite connection.

Later, Mark and myself needed to head back to the club for the racing briefing at 4pm and the rest of the crew decided to attend as well. After a few beers, we made our way back to the boat around 10pm. Sean and Mike got out at Sean’s hotel, while Shaun and myself headed to the boat. Sean called me to say that we should come back for a whiskey night cap but Shaun was not keen and was encouraging me not to go.

I was sitting on deck contemplating a walk back to the hotel when Alasdair, my brother, and his wife walked down the gang plank, having decided to surprise me by coming to watch the start. Shaun had been aware of this from earlier in the evening and had been trying all evening to get me back to the boat. We had a few beers and as they headed to their hotel, I decided to have vodka and coke on the neighbouring boat.

They are a Polish boat that has travelled around the world and the crew is very hospitable. Well, one thing led to another and we were watching the sunrise while sipping on the umpteenth homemade vodka. I am famed for staying up throughout the night on the 31st but as we were sailing on the 1st I knew that this was not possible – so why not the day before? Anyway, who plans a race to start on the 1st? Thanks to Thomas and mates aboard the Katharsis 2 for a good evening and introduction to 2017.

On the 31st, Michiel fetched the meat from the butcher and along with Wesley, bought the vegetables for the trip. That afternoon, Patrick, Ashley and their son, Jacob, came to visit and we once again had a ginger beer to celebrate. That night we had planned to have a quiet braai on the quayside next to our boat. The gas bottle was not able to connect to the braai, so Sean cooked everything on the ship’s stove.

It was hard being there without Karey and the children, who were now in Australia. I was very tired and only managed to get to midnight before going straight to bed. The firework display in the Waterfront on New Year’s Eve is awesome and I did not realise that it was so popular, as thousands of people streamed into line at the water’s edge to watch the fire in the sky. 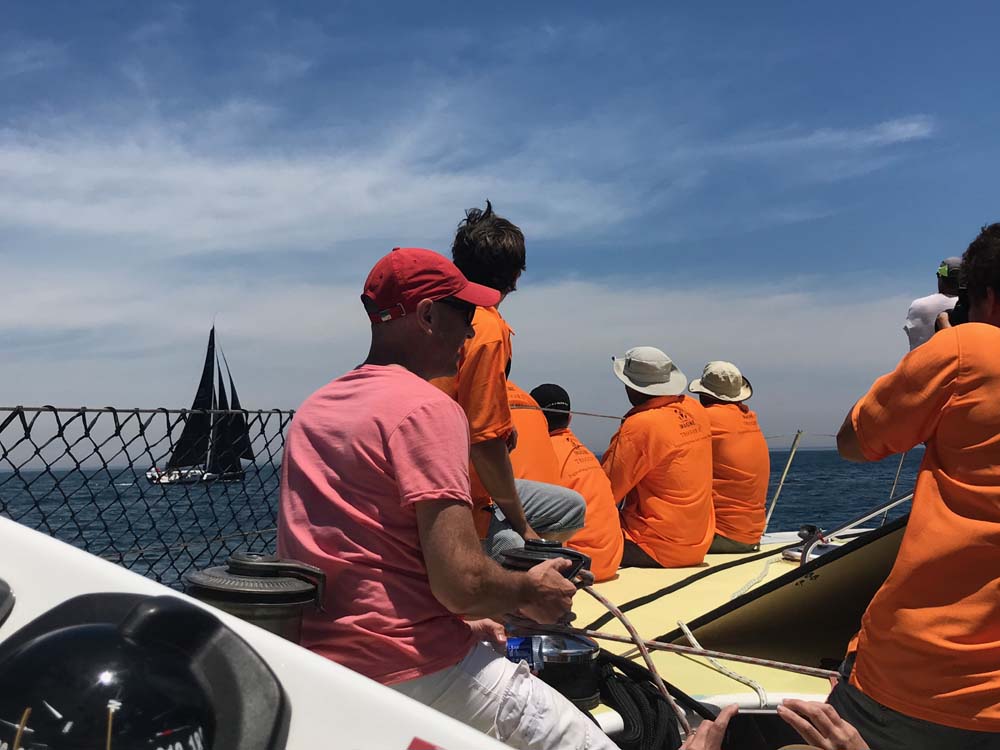 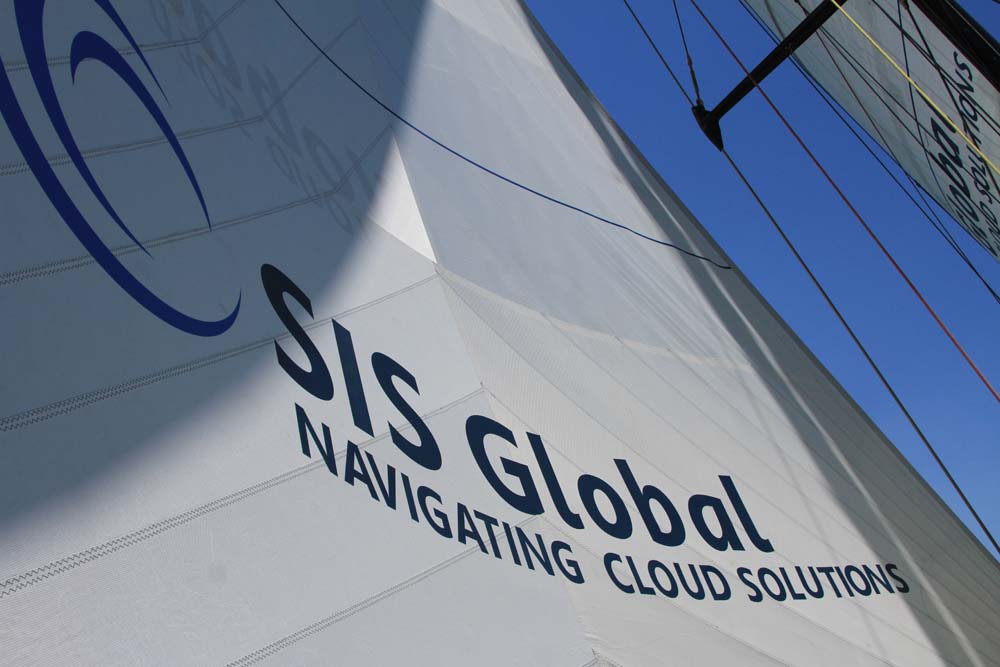 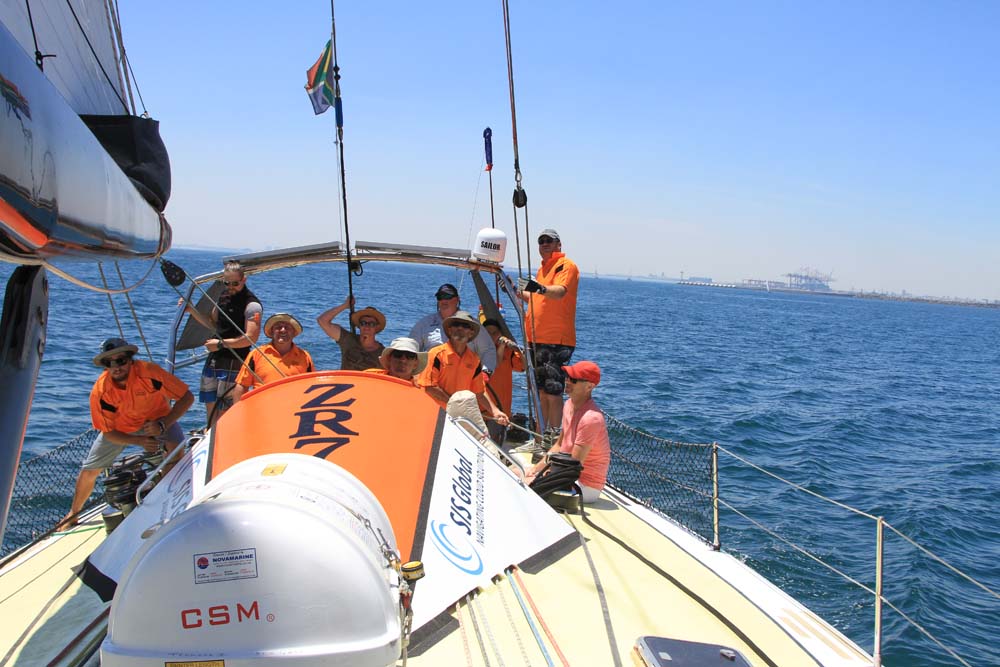 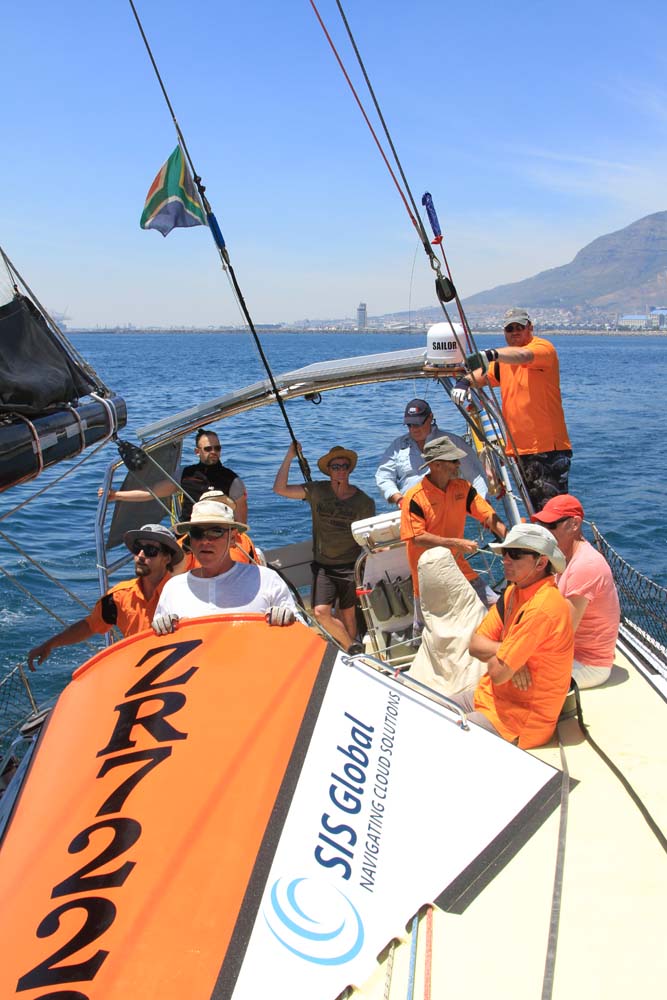 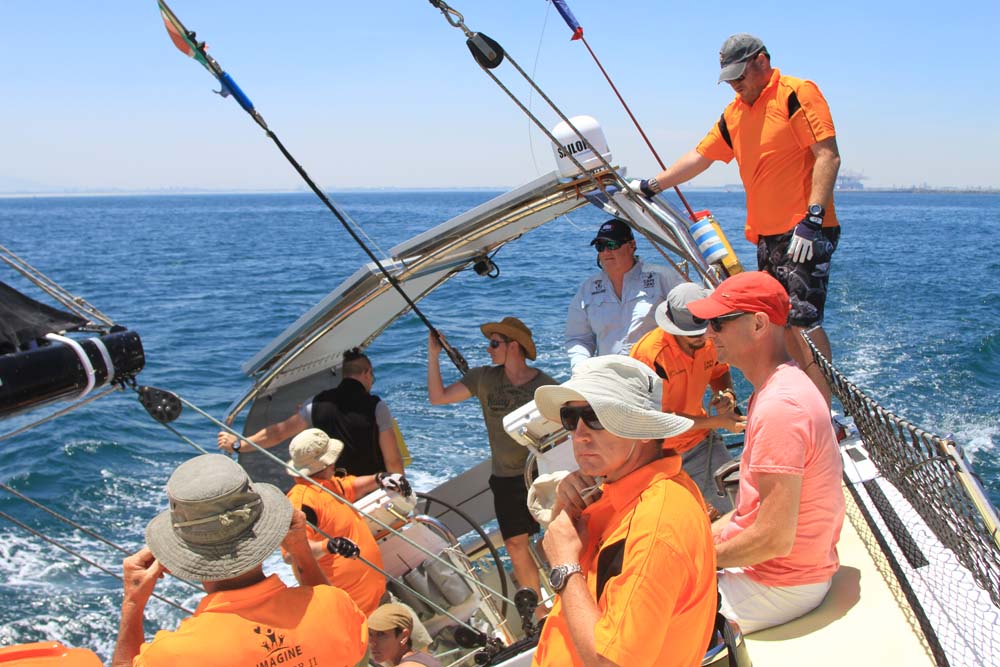 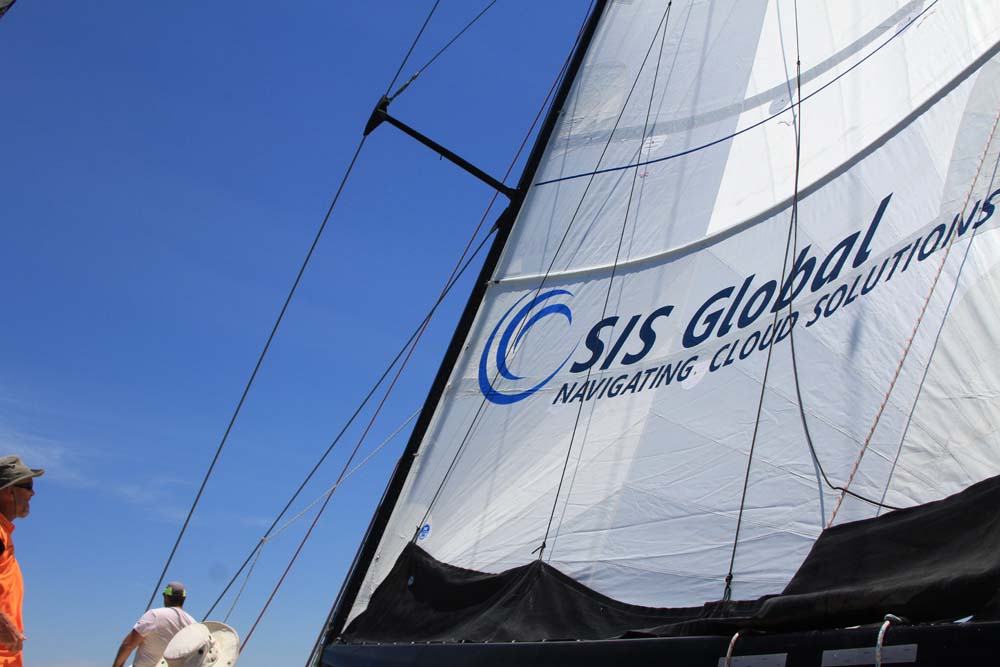 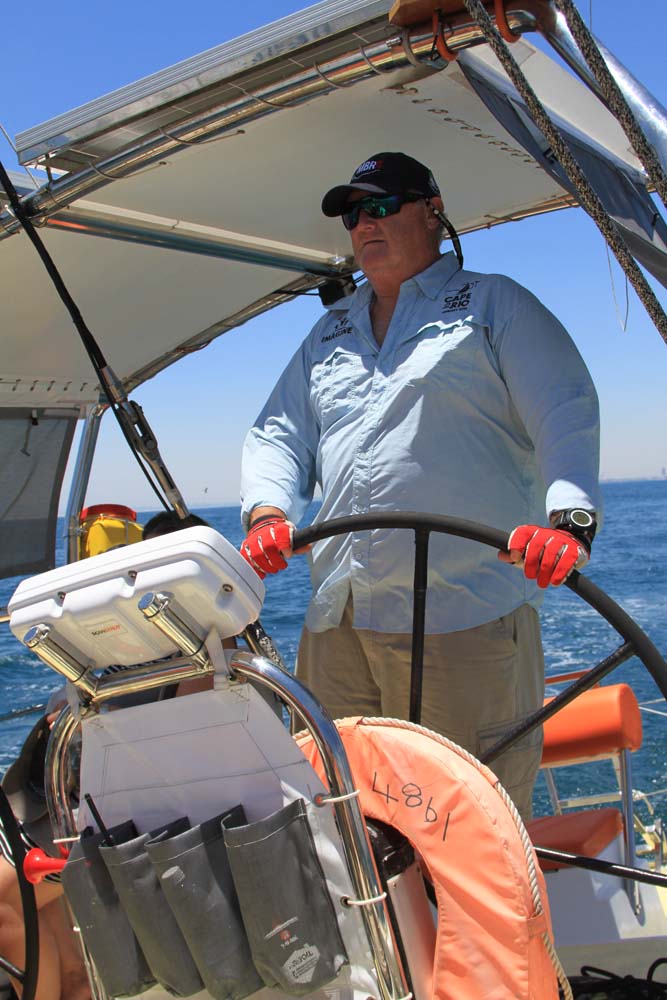 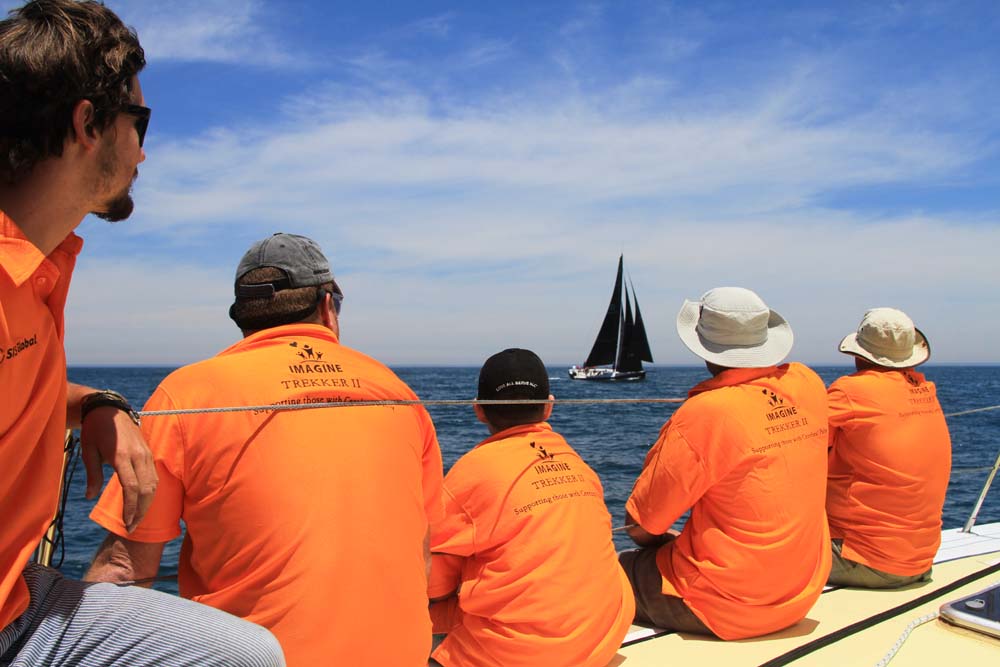 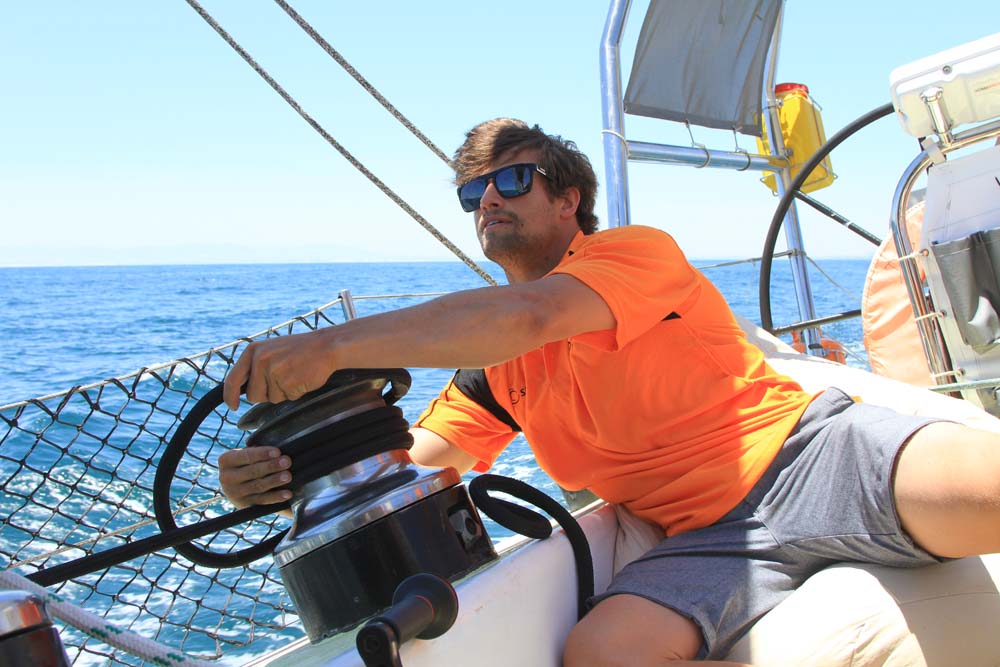 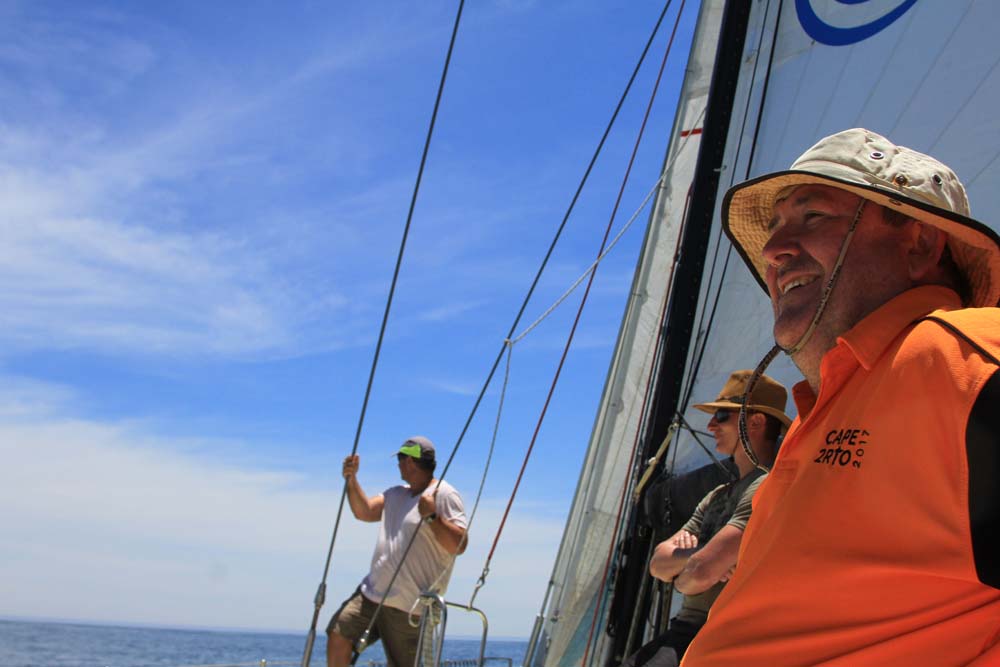 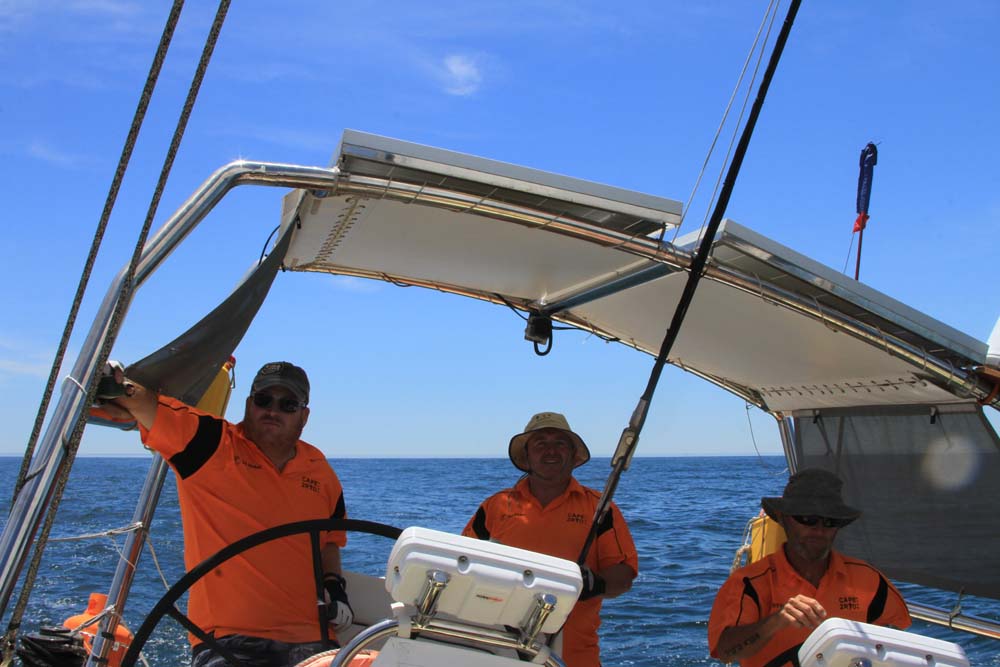 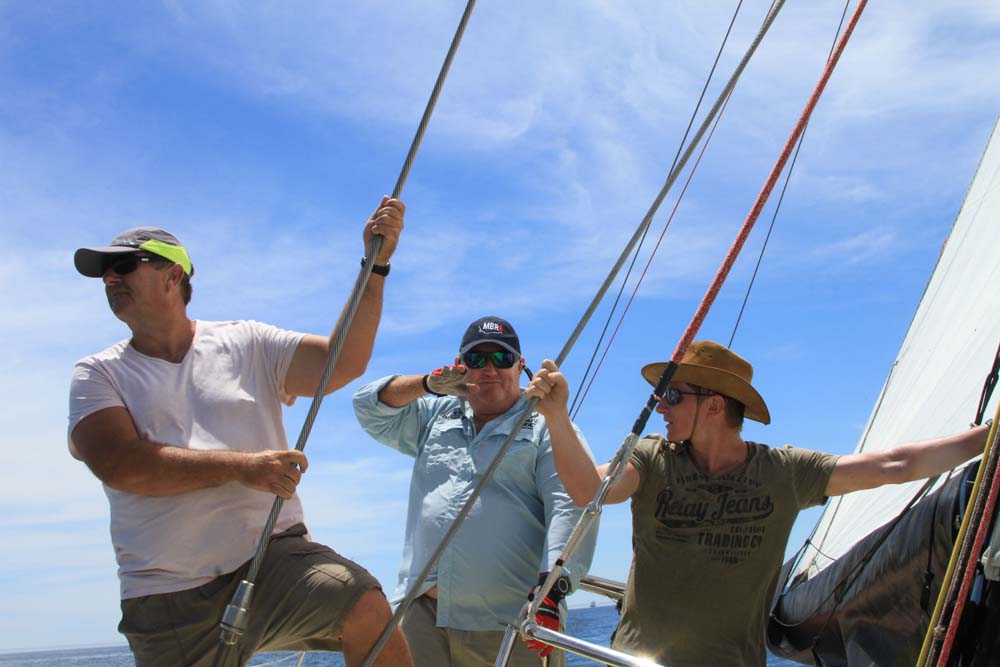 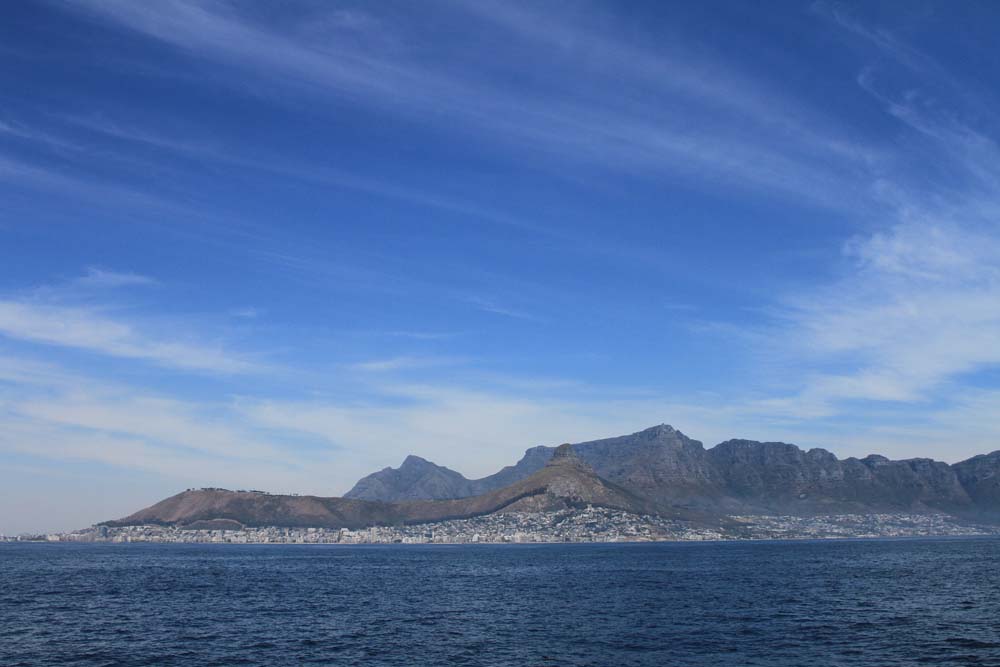 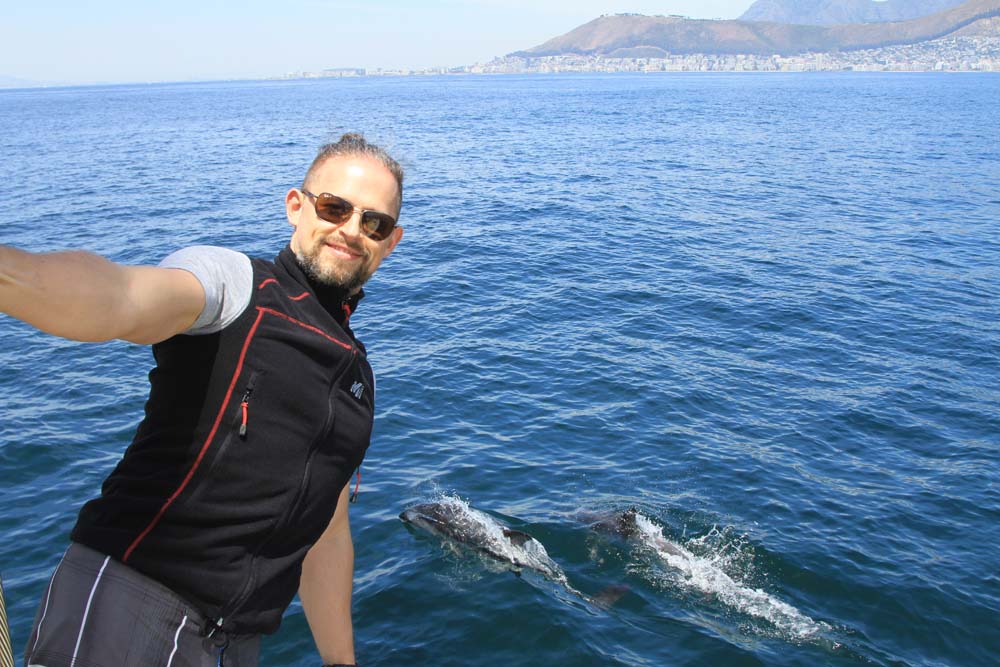 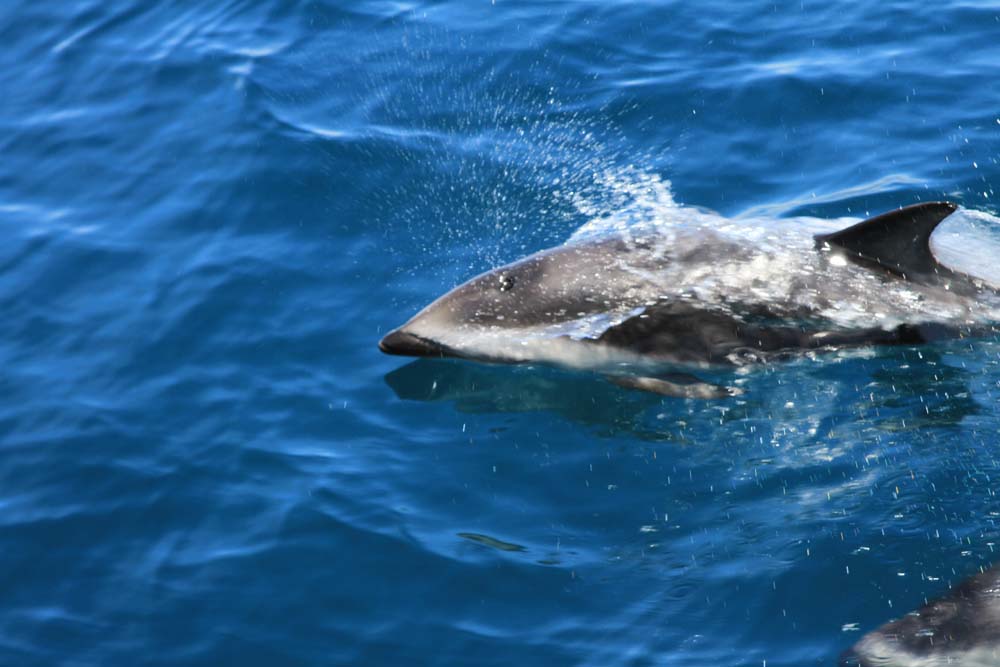 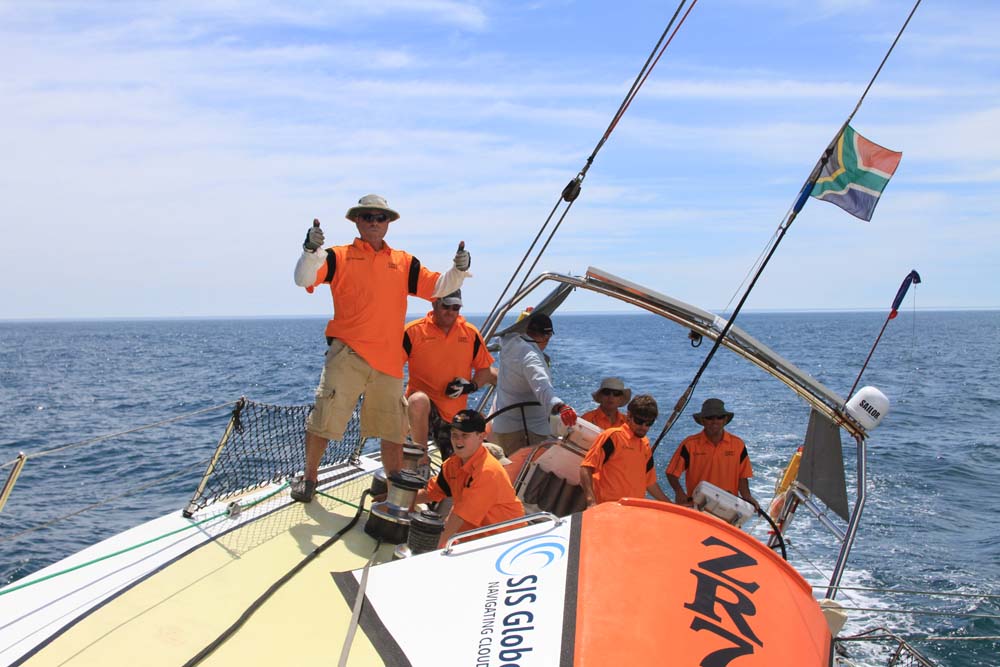 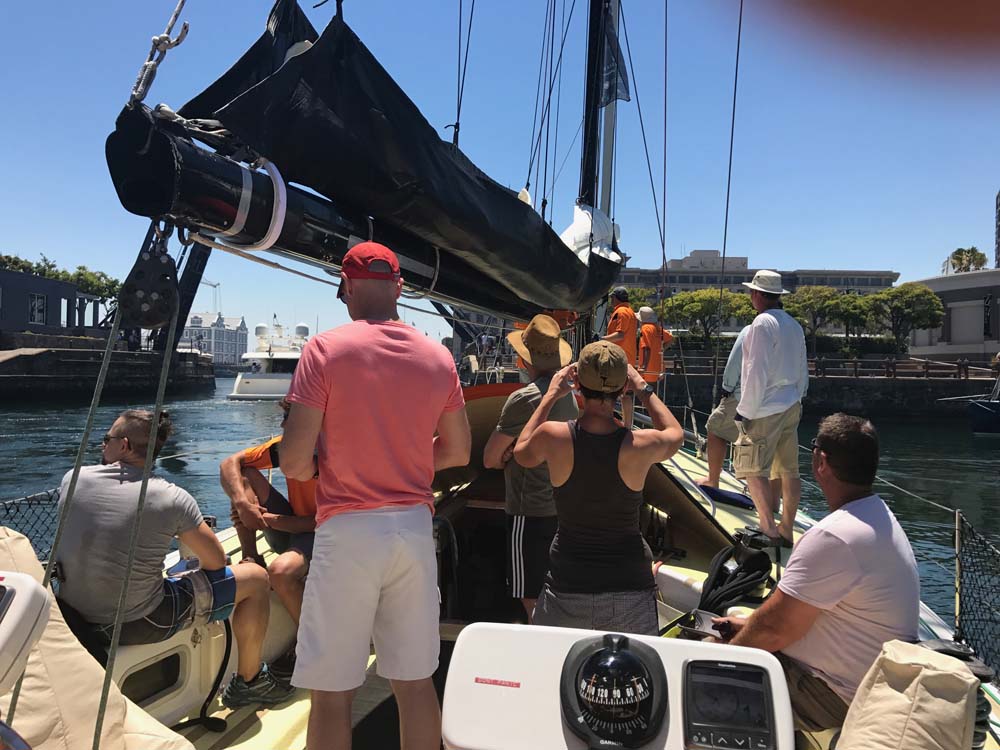 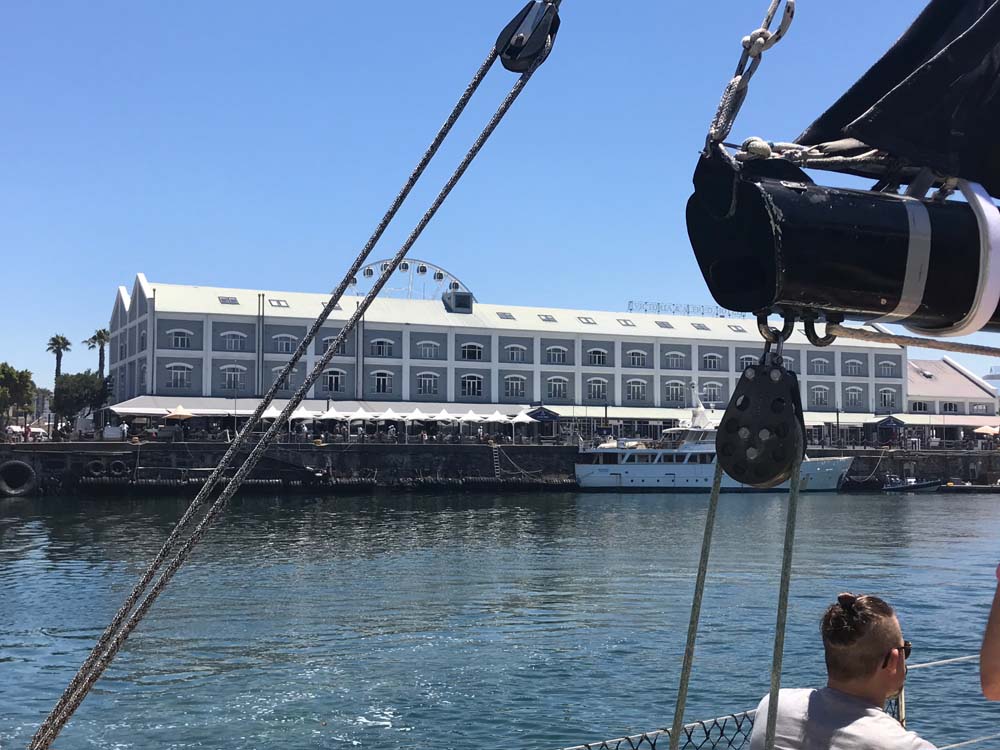 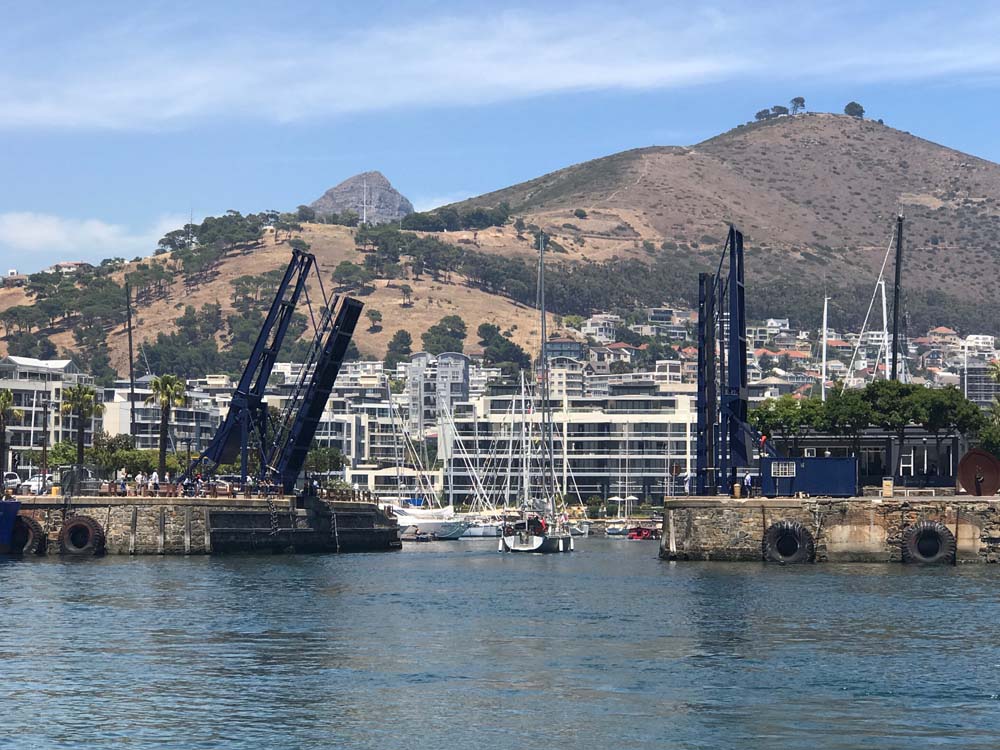